Breast Lift, How It Is Done

Home » Blog » Breast Lift, How It Is Done 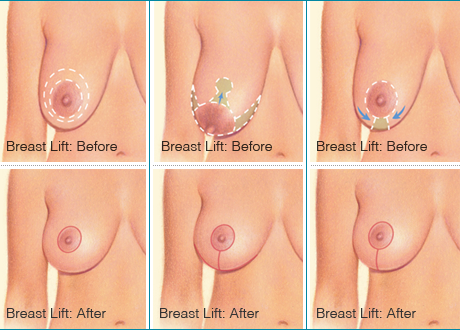 How is a breast lift performed? Three components need to be addressed: nipple position, breast skin envelope, and milk gland position and shape. Nipple position is the most important. The other components are placed in relation to the nipple. An incision around the nipple is always needed to relocate it.

Different amounts of breast skin are removed depending on how far the nipple needs to move and how much extra skin there is. The nipple stays attached to the milk gland, and both move upwards as a unit.  If a minor lift is needed, the nipple moves a small distance and the skin closure is only around the areola. The skin removed around the areola looks like a donut, so this is referred to as a donut mastopexy.  If a major lift is necessary, the place where the nipple was needs to be closed separately, and a vertical scar is left below the newly moved nipple and areola. This larger lift is called a vertical mastopexy.

When there is severe drooping such as after massive weight loss, the breast needs to be reshaped. In this case the operation is the same as a breast reduction, but no breast tissue is removed. All the breast tissue can be reshaped and repositioned  with  a Wise pattern lift often called an“anchor” operation. In the “anchor” operation the scar starts around the areola, then is connected to a vertical scar that extends to the inframammary fold and continues in the fold under the breast. So you see, this pattern is in the shape of an anchor. Although this operation does involve more conspicuous scars, all the breast’s components can be improved from nipple position and skin envelope to breast gland position and shape.