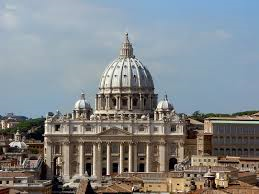 The Vatican recently released its position on cosmetic surgery in a document titled “Women’s Cultures: Equality and Difference”. It was written for the Plenary Assembly of the Pontifical Council for Culture held in Rome this February. In the 12 page document there are two references to plastic surgery. The first claims that plastic surgery is “a refusal of the body in as much as it is a refusal of the ‘season’ that is being lived out.” The second is “Plastic surgery is like a burqa made of flesh.” The document calls this burqa reference “harsh and incisive.” Just to be sure I looked up the definition of incisive—it means accurate and sharply focused. The Vatican explains that these comments are regarding “not medico-therapeutic” plastic surgeries.

I was saddened to read this document. The “burqa” comment implies that cosmetic surgery is a mask or cloak that hides one’s true self. I wonder; does this apply to make-up? Having a certain hairstyle? I think most people believe they have a right to express themselves through the way they appear to others. The “burqa” comment is followed by “Having been given freedom of choice for all, are we not under a new cultural yoke of a singular feminine model?” Unfortunately the Vatican doesn’t understand cosmetic surgery. Plastic surgeons are not in the business of creating a single “cookie cutter” appearance. Who would want that?

The first claim the Vatican makes, that cosmetic surgery is a refusal of the body, is more nuanced and insidious. It suggests that we should be happy with what the body gives us, we should not refuse the “season” of our aging. Then should we accept the cancers or heart disease we develop as we age? I think they mean that we should look old if we are. Now we know from studies of identical twins that if one avoids sun exposure and smoking the traditional signs of aging are lessened. Is the smoking tanned twin more accepting of their “season?”